The PRz Racing Team decided to use elements printed on a 3D printer for their project. The task of Omni3D was to print an element that would be adapted to the requirements of racing cars. The inlet manifold is an element exposed to vibrations, high temperatures of approx. 100°C and chemicals.

The Formula Student initiative initiated cooperation between the PRz Racing Team and Omni3D. Young enthusiasts faced the task of designing and then building the intake manifold. The biggest problem was adjusting the collector parameters to the most efficient engine operation. Complicated geometry, tightness of the system and its strength and stiffness (element exposed to vibrations, high temperatures around 100 degrees C and chemicals). A very important factor in guaranteeing success was the attempt to reduce the weight of the component compared to traditionally manufactured parts.

Description of the problem

The task was to print an element that would be adapted to the requirements of racing cars. The selected material had to be characterized by high temperature resistance, but also stiffness. A very important factor was the reduction of the weight of the element compared to traditionally manufactured parts and the ability to freely change the geometry.

The best solution to this challenge was the use of 3D printing, which, offering low costs and the possibility of several iterations of the project in a short time, gave the opportunity to conduct several tests. The model was printed on a Factory 2.0 NET printer using CF PA-12 filament. Already the first tests confirmed the design correctness of the element and efficiency as intended. The carbon fiber reinforced polyamide used provided the expected strength of the printed element. 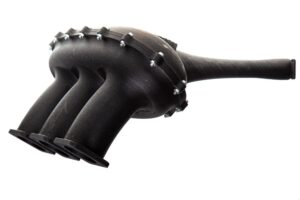 The 3D printed intake manifold is 1.5 kg lighter than a traditional aluminum component. The data based on the mass point simulation shows that thanks to the 3D printing technology, the weight reduction directly contributed to the better performance of the racing car. What’s more, thanks to the freedom of geometric changes, we have created a fully adapted model to obtain the best possible air flow. 3D printing turned out to be the best choice for the production of final parts for the new PRZ Racing Car-03.

Do you want to know more about the use of 3D printing in production?
Contact our specialist or ask for 3D printing on demand

This website uses cookies to improve your experience while you navigate through the website. Out of these cookies, the cookies that are categorized as necessary are stored on your browser as they are essential for the working of basic functionalities of the website. We also use third-party cookies that help us analyze and understand how you use this website. These cookies will be stored in your browser only with your consent. You also have the option to opt-out of these cookies. But opting out of some of these cookies may have an effect on your browsing experience.
Necessary Toujours activé
Les cookies nécessaires sont absolument essentiels au bon fonctionnement du site Web. Cette catégorie comprend uniquement les cookies qui assurent les fonctionnalités de base et les fonctions de sécurité du site Web. Ces cookies ne stockent aucune information personnelle.
Non-necessary
Tous les cookies qui peuvent ne pas être particulièrement nécessaires au fonctionnement du site Web et sont utilisés spécifiquement pour collecter des données personnelles des utilisateurs via des analyses, des publicités et d'autres contenus intégrés sont appelés cookies non nécessaires. Il est obligatoire d'obtenir le consentement de l'utilisateur avant d'exécuter ces cookies sur votre site Web.
Enregistrer & appliquer