Is it worth to invest in a professional 3D printer?

Once upon a time, when additive manufacturing was considered by most people to be the technology of the future, professional 3D printers cost hundreds of thousands of euros, and the print quality left much to be desired. With the release of 3D printing patents, hundreds of 3D printing companies entered the market. A large number of these companies began to produce cheap desktop printers, which made the technology more mundane and accessible to the Average Joe.

Until recently, a desktop printers had an open chamber and printed with PLA and several other undemanding filaments. Today on the market we can find „desktops” that offer more and more professional features. Currently, these printers have a closed chamber, higher and higher temperatures, and are made of good materials, thanks to which they can handle more materials than their predecessors from previous years.

Then, if desktop 3D printers offer more and more at a relatively low price, does it make sense to invest in a professional 3D printing machine that often costs several times more?

Of course! In fact, the two types of printers are very different from each other. And while desktop printers have made a huge technological progress, this progress was not less in the case of industrial printers. In fact, it is industrial printers that are primarily responsible for setting direction for the entire industry. In such printers, the latest mechanical, electronic and software solutions are used, which significantly increase the quality of printing, material possibilities and user experience.

How are desktop printers different from industrial printers?

Many people think that an industrial printer will be too difficult for them and prefer to start their adventure with 3D printing from something cheaper and more basic … nothing could be further from the truth!

A printer using an industrial printer has far fewer responsibilities than if he were using its „desktop” counterpart. This is because they have many great solutions, such as: automatic table leveling, mesh leveling, automatic lifting of the inactive head, or automatic nozzle cleaning. In fact, everything happens from the level of the control panel, be it on the printer or from a dedicated website, unlike a desktop printer, which often requires basic knowledge and intervention from the printer.

Summing up, the biggest disadvantage of professional printing systems is their relatively high price because the prices of such printers start from PLN 50,000 net and end at PLN 200,000 net. Nevertheless, this price is followed by specific advantages in the form of reliability, print quality, additional services and many others.

If anyone else is wondering whether it is worth choosing a more expensive solution, the answer is yes! 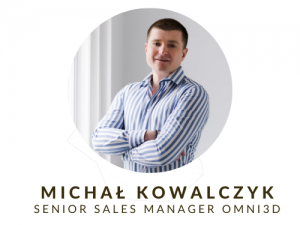