3D printing is not only limited to small parts and models that can be produced with desktop printers. The widespread use of this type of printers causes many people to believe that the dimensions of the printed elements are limited. The alternative turns out to be printing entirely. Some machines offer a very large print volume, which can reach even one cubic meter! This type of professional large-format 3D printer is presented by the industrial Omni3D printers.

The incorporation of 3D printing into industrial product development and prototyping is now a widely accepted strategy for reducing costs and lead time. But the later stages of industrial production are also ripe for innovation using 3D printing. One area that is growing rapidly is 3D printed tools for use in series production.

3D printed production tools reduce work processes, greatly simplify production workflows with 3D printed tools. Production tools that have been produced on an industrial Omni3D printer are implemented in quality assurance processes and reduce the time needed on the control lines using simple test devices. This means that the number of work steps is halved, which saves employees time and reduces order processing time. The area of such applications is printing, for example, various types of gauges. Rather than outsourcing a workshop to hand-crafting aluminum or other metals, the company uses an Omni3D printer to optimize its work processes.

Rapid prototyping is changing the way a product is created. However, this process is burdened with difficulties in various places. If you prevent one of the biggest bottlenecks on the way to the final product design, the entire process can become better and faster. Rapid prototyping can greatly simplify the entire design process with large-scale 3D printing. It allows you to quickly correct errors in the design process. It offers significant advantages in terms of faster market launch and offers better opportunities. Each iteration can be tested and improved. This is an inexpensive process and improves communication efficiency throughout the design cycle. There are two benefits of this:

Instead of waiting months or years for traditional prototype construction, the rapid prototyping process with 3D printing typically only takes a few days. A 3D printer allows you to create the next iteration much faster than the traditional prototyping process. Accelerating the design cycle inherently shortens the time-to-market of a new product. An example of this is the printing of prototypes for seats for a company that produces seats for rail vehicles. The standard method would be three months. Thanks to the use of the Factory 2.0 printer, it lasted less than 3 weeks.

Each 3D printed prototype is one step better than the previous version. Choosing a life-size functional prototype will help you better understand the advantages and disadvantages of this particular design, so it can be quickly approved or rejected because it can be tested. The design team can test the technical characteristics and see the appearance of each prototype. In this way, you can understand, evaluate and correct any production issues or threats to ease of use already in the development phase. In the case of this model of seats, it allowed to eliminate the wrong size of the fold-out table at the prototype stage. It turned out to be too big. Would cause great inconvenience to the passenger sitting next to it.

The acceleration of time to market goes hand in hand with the reduction of costs associated with long design cycles. Of course, when a product is brought to market faster, the high price of longer, labor-intensive processes is reduced. 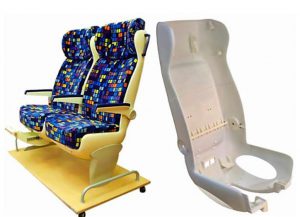 Competitive positioning requires rapid development and adaptation, especially in the consumer market. Large-size 3D printing also allows several different prototypes to be manufactured simultaneously, making it possible to make decisions faster when there is a choice between several optical or tactile characteristics.

If your company is looking for opportunities to save time and reduce costs,  contact us.
We will conduct a free audit and present an offer of Omni3D industrial 3D printers tailored to your needs. 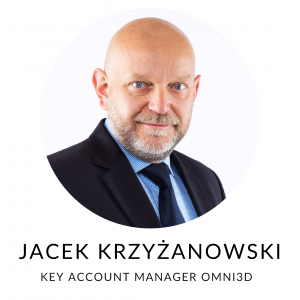