The more we delve into the world of filaments and the possibility of their use in various industries and sectors, the more often we think about chemical "durability". The field of research in this aspect is not yet developed - and some experiments are burdened with a long term of feasibility. What does it mean?

Chemical resistance is a long-term change of the working environment from neutral to „harmful”. Consequently, there are many disputes over the interpretation of the meaning of the word „long-term”. Is a few or a dozen hours enough – should we conduct multi-week or even multi-year tests? For example, one of the questions with no clear answer is how long the operation of, for example, the water environment will affect the printouts – bearing in mind and knowing the tendency of filaments to be hygroscopic. But that’s not what I’m going to do today. In a short publication I will describe those filaments that show „resistance” to everything – I meaning – chemicals. I will also try to explain if there is a difference between the filament and the printout that was made of it.

Some of You may ask why filaments can behave differently than prints. Explanation: in the printing process, they are subjected to high temperature and pressure – which directly changes their internal structure and some properties. Based on the research, it can be clearly said that the treatment of the printing process affects the primary filament, which has a lower resistance than the print made from it.

Among the many aspects of chemical resistance, the one responsible for resisting the action of alcohols and acids is the key. These are the two elements that occur most frequently in the environment and which determine the use and application of a given filament and printout. “Superfilaments” are those which do not change their dimensions, consistency and properties in both alcoholic and acidic environments. Such filaments are PP, PPS (also PPSU), PAEK (PEEK, PEKK) and PEI.

The „easiest” to print from the above-mentioned is PP – i.e. Polypropylene. However, it requires the use of industrial solutions common in highly professional printers and personalized adhesives. It is a filament characterized by high flexibility and durability, and at the same time even a long-term change of the working environment does not affect its chemical resistance and dimensions. Polypropylene is the most common material in the production of bottles or other tanks. More and more often it is used in the production of orthoses, laboratory containers, but also elements exposed to long-term impact, e.g. a changing of natural environment and used in the production of car parts such as bumpers or covers. As it is neutral in contact with food, it is widely used in the food industry.

Another interesting filament solution is PPS or PPSU – i.e. polyphenylene sulfide. It is a well-known and increasingly used alternative to PEEK, which has really good adhesive properties between the layers, which affects its strength in each axis. The offer of Omni3D includes, for example, Thermec Zed, which represents this group of filaments, and which does not dissolve in any substance at temperatures below 200°C. It is used in the production of tanks in which „aggressive” substances are deposited. As a much cheaper alternative to PEEK, we find it in the automotive industry (brake fluid reservoir), in automation as part of production lines, but also more and more often used in the electronics industry, e.g. as the so-called „Heatbreak”. Unlike many filaments, PPS (PPSU) prints are characterized by a very low moisture absorption. 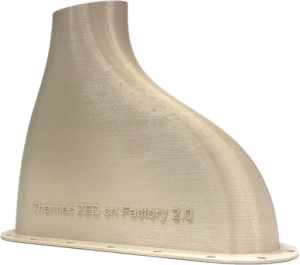 3D printout from ThermecZED on Factory 2.0

The PAEK family is a group of industrial filaments with increased strength parameters. So called Polyaryletherketone. PEEK belongs to this family! One of the most durable filaments in use today and the desire of many industries. Its chemical name is PoliEtherEtherKeton. In addition to excellent mechanical properties, it is flame-retardant and extremely resistant to chemical agents. The disadvantages of PEEK are its printing conditions, in most cases we need to use high-temperature post-process treatment, and rapid cooling during printing process, which significantly affects the difference in strength in different axes (in particular, the adhesiveness between layers). An alternative to PEEK is belonging to PAEK – PEKK – i.e. PoliEtherKetonKeton. Printouts from this filament are characterized by a similar, although lower strength than PEEK, but do not require costly and long-term post-process thermal processing (heating in a high-temperature oven) and are much easier to print. Which does not mean that everyone can print them – the indispensable elements of its processing are high extrusion temperature and a completely heated chamber. The Omni3D’s – PEKK-A that we can find in the offer is an excellent example.

The last group are filaments from the PEI family – i.e. polyetherimides. Extraordinary filaments, often referred to as those that change the rules of the game and bring 3D printing to the next level. They are characterized not only by very high chemical resistance, even at much higher temperatures than 200°C, but also abrasion resistance and non-flammability. For filaments from this group, the areas of application are the widest. From medicine, automotive to the aerospace industry. Acids or alcohols for Ultemu (PEI) prints are „neutral” or almost neutral.

To sum up – if chemical resistance is the most important for You – You need to consider in what environment and how long Your printout will be affected by. You do not operate at high temperature, but the interaction of acids and alcohols is an important element – choose PP – low cost, relatively easy printing will ensure full satisfaction. If You are looking for a filament that will be very durable and hard – Your choice should be PPS (PPSU) – for example Thermec Zed (see case-study Volkswagen with ThermecZed).
If You want more and costs don’t matter, one of from the PAEK or PEI families should be Your choice. Chemical resistance, coupled with other properties, is what can take Your project to the next level.

Want to know more about 3D printing?
Contact us and discover the possibilities of industrial 3D printers 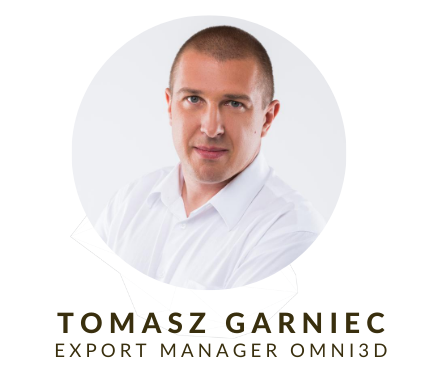